The first figure of the new Hyundai i-oniq conception car has been released, showcasing new technology and design which present an impression of the company's upcoming philosophy.

The Hyundai i-oniq is an electric sports instruction hatchback with a range-extending petrol engine. Intentional to convey the latest thinking from Hyundai's designers and engineers, the i-oniq evolves the company's fluidic figure form language and represents bold 'New Possibilities' with its revolutionary muscle train. 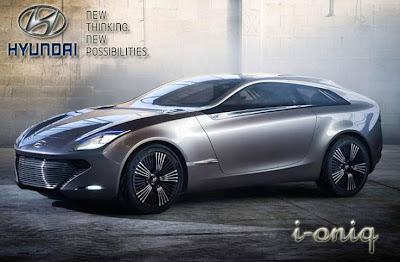 Hyundai stylists choose dynamic magnitude to create i-oniq's visual and functional body shape. Its design combines moderate feature lines and strong surface treatment, conveying both premium and sporty qualities marked in both the exterior and interior of the car. Further design basics, such as the 'Penthouse Roof' and LED headlights, highlight the efficiency and advanced technology encased within Hyundai i-oniq Concept.

The Hyundai i-oniq Concept has an original power train that demonstrates Hyundai's dedication to clean technology. A 1.0-litre, 3-cylinder petrol engine is mated, via a generator, to a lithium ion electric motor which fabricates 109 ps. In electric-only method, i-oniq has a range of 120 km, while with support from the petrol engine it can travel up to 700 km, producing just 45 g/km of CO2 in the progression.

Posted by stempelkaartenhemel at 4:48 AM No comments:

The Audi e-Tron concept attempts to wed the ideas of battery power and high-performance sports cars. The sexy two-seater uses a lithium-ion battery pack, which is liquid-cooled and situated behind the passenger section. Audi puts the e-Tron's 0-to-62 mph time at 4.8 seconds -- that's 0.2 second following the R8 V-8 -- but top speed is limited to only 124 mph, as higher speeds speedily consume the battery. For the e-Tron, Audi is declaring a 154-mile range.

Continuing the R8 relationship, the e-Tron is regarding 7 inches shorter in length, half-a-foot narrower, and an inch lower. It uses an aluminum space surround and fiber-reinforced plastic for the doors, roof, fenders, and lids. The advertised curb weight is 3527 lbs, 58 percent of which is over the raise hinge. An R8 V-8 is concerning 90 lbs lighter. In the e-Tron, the succession accounts for 1036 lbs of its full amount.

The e-Tron's other high-tech skin texture contain a heat pump for interior climate control, closeable air intakes, an iPhone-like touch-screen scroll pad to control Audi's MMI interface, and intellectual, all-LED lighting that uses a forward-looking camera to vary the light pattern of the headlights in reaction to oncoming interchange and also takes clues from the nav system to turn on cornering lights as the car approaches a camber.

The e-Tron is not regarding to start stealing sales from the Tesla roadster. Instead, Audi's battery-powered e-Tron concept is the high-visibility kick-off to a three-year project consolidating its research on exciting mobility.


Posted by stempelkaartenhemel at 2:35 AM No comments:

The 2012 Detroit Auto illustrate is off to a gallop start. Organizer approximation more than 750,000 people are predictable to show up to take in the most recent hardware from the world's automakers. Sunday saw 102,918 people be present at the exhibition, which is an augment of more than 3,800 people from last year. Similarly, Saturday twisted out to be the main opening days for the Detroit Auto demonstrate in five years. All tell, 195,024 people stroll through Cobo hall to take in the tourist attractions. This year, the show skin more than 500 vehicles, so there's abundance to see.

And it's not just wild exotics and far-flung concept, either. With key innovative reveal like the move Dart, Ford Fusion and Cadillac ATS, company can get in model they can wait for to see on the show room floor within a few short months. Be sure to make sure out the roundup of our show coverage as well as our top five editor's picks if you miss them.
Posted by stempelkaartenhemel at 11:33 PM No comments:

Hilarious video recording of smart four two crash tests (including hitting a concrete wall at 70mph) for a while now. Well, the NHTSA has finally crashed a few smarts in the name of insurance ratings security and the verdict is in: the smart is safer than you might think. The diminutive German car gets four stars for driver security and three stars for the passenger in the frontal crash test.

Side impact testing revealed five-star presentation, although a door did open throughout the test, "increasing the likelihood of passenger ejection." Granted, "Starflation" has been an issue for the NHTSA, but like an underachieving elected official, the smart is simply playing the opportunity game. The fact that the minuscule ride didn't explode into a million pieces of wound-irritating fiberglass is probably sufficient to surprise the average American consumer, who likely sees the smart as a small step up from a Segway scooter in terms of safety.
Posted by stempelkaartenhemel at 9:33 PM No comments:

Since its beginning in 1989, Lexus’ focus on the “hard” science of quality and dependability has been exciting. Even though it has some sporty models in its portfolio, the premium Japanese automaker is still frequently known for building luxury cars better known for superiority than performance. Lexus realizes the significance of its “boring car” standing and is intent to change the course. On the eve of the 2012 North American International Auto Show, we had an exclusive, secretly peek at the new Lexus LF-LC concept car, a core from which all potential Lexus models may draw motivation.

Kevin Hunter, president of Calty Design Research, eminent that they were given a clean sheet of paper to blueprint the LF-LC. The assignment was to come up with a new 2+2 hybrid coupe conception to redefine Lexus’ future design language. Only some written attributes were given as criteria: Avant-garde loveliness, Originality, Driving joy and Unequaled technology. No wonder the Calty team, including Ian Cartabiano and Edward Lee for exterior, and William Chergosky and Ben Chang for interior, was excited to work on this rare project. In fact, the designers were also told exclusively by the president and CEO of Toyota, Akio Toyoda, to make sure the concept is required to have the “wow” factor.

The face of LF-LC incorporates essentials of the Lexus spindle grille that also appears on the freshly introduced GS. Each L-shaped headlight contains three LED projectors that are similar to forward-looking camera lenses. The pointed snout set off by large perpendicular air scoops that flank the grille, plus the ribbon-like fender surfaces bending and folding aft, are some of the elements of the strong front-end management. In profile, the LF-LC has a muscular lean-back stance delineated by a simple flowing roofline that’s cantilevered at the A-pillar to give an airy feel to the passenger log cabin. Large air scoops are nestled within the wide nurture fenders. And approximately the back, the Lexus spindle outline is repeated with bold quality lines in the fascia, capped with taillights designed with depth to simulate the appearance of a jet engine with its afterburners on. Thin, vertical fog lamps fall from the edge of the taillights and well complement the stacked quad exhaust pipes.

Posted by stempelkaartenhemel at 4:20 AM No comments: 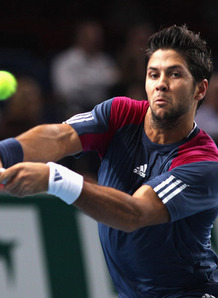 Third seed Fernando Verdasco crashed out of the Brisbane International at the first obstacle after losing in three sets to Benjamin Becker.

The Spaniard looked to have overcome a lethargic start as he edged a second set tie-breaker, but was outplayed in the decider as Becker sealed a deserved victory and a second round fight with Colombia's Santiago Giraldo.

"I had a good game diagram and it worked well today," 53rd-ranked Becker said afterwards.

"It is forever good to get a win under your belt... and it’s not every day you beat a top 10 player."

Somewhere else in the first round, fourth seed Mardy Fish came through in at ease style as he beat Alex Mannarino of France in straight sets 6-1 6-4, while Radek Stepanek beat Tobias Kamke, the Czech coming from a set down to triumph 5-7 6-1 6-4.
Posted by stempelkaartenhemel at 3:34 AM No comments: